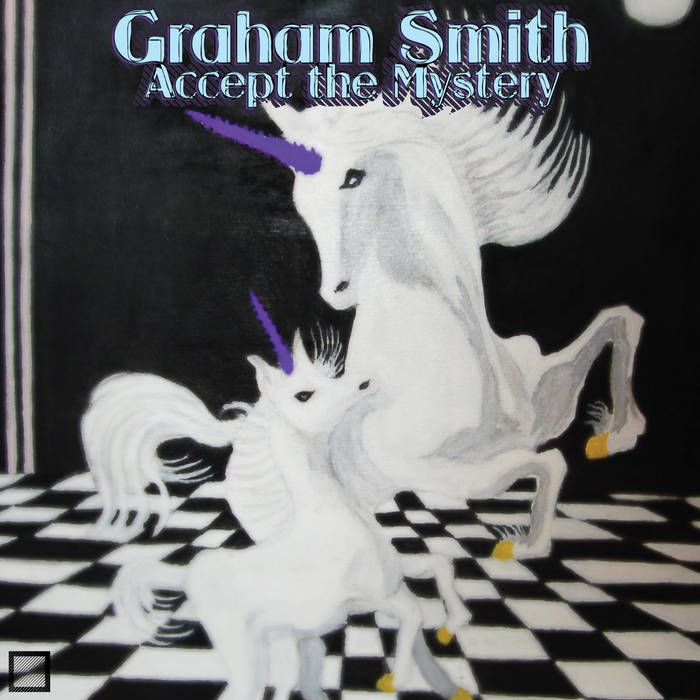 Ashlea Gernand This album cajoled it's way into my heart and mind, in some ways it feels like one of Mr. Smith's most succinct and fertile offerings. No, those things are not mutually exclusive! The Will of John Roach is one of my favorite songs ERVER! What are the chances of seeing this performed live in St Louis MO? Vote for Graham Smith, with all of your money...Midwest Tour!

I went back and forth as to whether this should be Graham Smith or full band but I did the whole thing myself (didn't even get it mastered this time - whole hog we call that) so it just seemed natural.

There were lots of other scuppered titles for this one - Linux Ex Machina, Comic Sans Humor (abandoned since it will be the name of a forthcoming comic), Natural history & magic. (abandoned due to conflict in my mind with another artist's album title), The Master and M*rgaritaville (abandoned due to perceived or real legal problematicness), but ultimately I went with "Accept the Mystery" simply because it's succinct and matches the album better than any others. Plus I don't think anyone will sue me over it. (Please don't sue me over anything. The third character in track four is a "0", that is, a zero).

A certain website decided it prudent to chide me for both my overall release quality w/r/t this release (full disclosure, I know it is pretty dumb to disclose this in an album description) as well as the lack of information about it. Well! Let it never be said that I won't spew information on com-/de-mand.

This album was always supposed to be about mysterious twists, unlikely choices, etc. Songs 1, 2 and 5 were the first recorded, all completed in 2009. The rest were completed in 2010.

I suppose there may have been songwriterly (ugh) "themes" employed, but most of them involved making fun of Grizzy Bear - THROUGH MUSIC - and trying to convince people that Grizzly Bear sounds like Al Stewart, but in the bad way, and also trying to occasionally sound like Al Stewart, only in the good way (cf. Thessaloniki).

Lyrically, I'm not sure I've taken the time to analyze it and where it sits in the progression from the loooong-syllabled days of Ponyoak up through the more wackily-hyperverbose era of Yes Boss and Mrs. Equitone. I tried to have more instrumental passages, to let the songs breathe more. But where there are lyrics, there tend to be a lot.

As for their meanings, I really wish there was a way to comment on them within Bandcamp's interface. Knowing Ethan's insane legacy of unmitigated quality, I'm sure it will be here soon.

But I will say that there are nostalgic notions in a way that have not presented themselves on a GS/KGW release in the past. Like Mary (the character in the film), There Is Something About the 1990's. And obviously there isn't, I just like it because I was spry and granular. And briefly a vegan.

The last song, THESE THINGS ARE NICE..., (emphasis mine, comma not included), seems to be an early favorite, and it is probably my favorite. I wrote it alongside The Passion in a notebook on the same night - TTAN was mostly composed before that, but in bits and bobs. It needed sequencing, and I didn't play it on guitar whilst singing (or at all, I guess) for a good month or so. The first time I did, I knew it was going to be a remarkable (in the classic sense) jam. It was the last song recorded for the album.

Lyrically, I like to delude myself that the song is fairly straightforward, but if not: it is one of many in my/our catalog that address how valuable the Musical Endeavor is. Rest assured (or with one ear open, as you like) that I find far more value in it than any such song might possibly convey.